Over the years, there has been a lot of noise (I say noise, because I don’t know that it quite qualifies as “debate”) around the content publishers’ struggles to monetize their digital properties and to off-set losses they suffer in print.

I have been away from the U.S. for the last three years and because of this have largely ignored the developments in the domestic content publishing world. Maybe it is because of this large time gap that I was shocked by how much things have deteriorated, and I base this on a coupe of observations:

1. Content Quality – maybe not a total surprise to those consuming it, but it has become absolutely god-awful. It is as if the previously veritable publishers have capitulated to the 140 character onslaught from the likes of Kim, Kanye, Buzzfeed and others. This pivoting toward sensationalist publishing, which I can’t even call journalism, is doing the reverse of what I think the content owners were hoping to accomplish. It is deteriorating the lines between “newspapers/magazines of record” and the vox populi fronting as news organizations.

Blame 24 hour news cycles, dwindling attention spans of the nation, or what have you, but there is very little out there now that makes for a compelling media consumption experience. The publishers that have held out, like the Financial Times and NYT (and to some extent, WSJ), can erect and maintain pay walls because of how vastly superior their content is to the rest of the Internet.

This, by the way, is not as much of a trend in Europe, where publishers are refusing to capitulate to the trends seen in the U.S. and who fight to maintain the quality of its journalism. It’s not a sweeping statement, but the media landscape in Europe is different and is not as commercially driven as in the U.S., so the arc of content degradation is not as acute.

2. The actual user experience of many sites has become awful. Not only is the speed of rendering painfully slow because of the various ad units that need to be called and rendered, but the insane amount of third party ad technologies that have to fire up their pixels on every page load makes trying to read any piece of content nearly impossible.

CNBC really pissed me off today when I tried to read a story from a link a friend sent me. 37 individual pixels from third party ad tech companies fired. I felt like a slut at a gang bang, really. 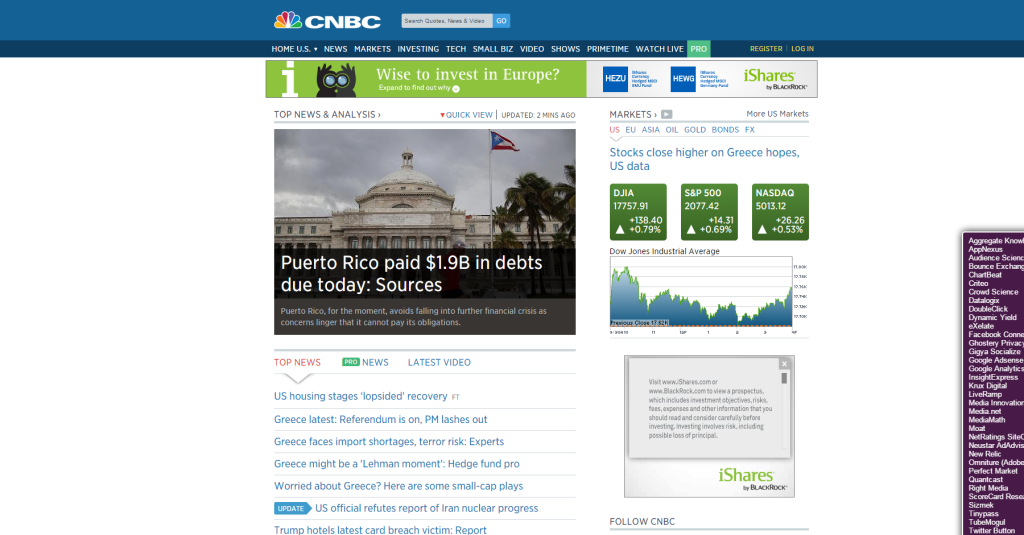 I’m one of the people who actually preaches about content not being free, and the value exchange between consumers and publishers has to be in the form of advertising and data collection. But surely, when you are selling my impressions across dozens of platforms, while serving me content that has degraded significantly over time, the argument toward what is and isn’t a fair “price to pay” for a free article is going to shift toward the side of the consumer.

This race to the bottom is going to hurt the publishers and the consumers. As always, the winners will be those who played the long game, rather than dropping their pants and selling out. Content has, and will continue to be king. It has the power to shape political agendas, enlighten and educate the masses, and shift national discourse. But that’s when it is at its best. At its worst, it is senseless passing of time, which isn’t even entertainment. It’s rehashing, re-purposing and re-posting of noise and just because it gets clicks, does not mean that it should be what we are fed.

Content used to be about elevating the discussion. About presenting new ideas. The origination of what was written was not based on focus groups, who dictated what they wanted to read, but rather by highly intellectual journalists and editors who served as curators for what mattered. Now, we live in an inverted world, where micro-trends dictate what is being talked and written about, in turn perpetuating the conversation which, in essence, is about nothing. Of course, there are things that surface up that are interesting, unique and worthy of amplification to the wider masses, but at the fire hose approach that is currently being employed is fundamentally broken.